A warm welcome to my blog! 🙂

When asked about my background, I often give the short version: “it is diverse and in lots of different fields”. In my first blog post, I want to give a little bit more detail about what I did before joining EINST4INE.

I am from Austria and went to high school in Vienna (see the featured picture – that’s Vienna! (: ). I had the amazing opportunity to be part of the high school Sir-Karl-Popper-Schule, which gave me the opportunity to choose most of my subjects flexibly and to pick rather specific courses (e.g., Nuclear Physics or English Literature). In those years, I realized that I liked many different areas and that I was fascinated by diverse topics within Natural Sciences and Social Sciences – I picked courses across disciplines, following the motto: “Why not?”.
During high school I was also able to spend a semester abroad in South Carolina, U.S. which influenced my choice of studies greatly. It was luck that I ended up in a Sociology class, encountering for the first time terms like “social role” or “social identity”. I was fascinated – these concepts gave names to the things that were happening around me! And so I started to appreciate how much Sociology could explain human interactions.

The agony of choice

Then, within no time, high school was over and I was faced with the dreadful task of choosing what I wanted to do next. I knew I wanted to study at university – but what? After visiting many orientation events, drafting countless lists, and trying to reduce the number of degrees I was interested in, I finally settled for two. I thought they complemented each other amazingly because they both tried to explain the world surrounding us – one from a natural science perspective and the other one from a social science perspective. But in administrative terms, they did not complement each other at all. So during my two bachelor’s degrees in Physics and Sociology, I not only learned important concepts of these disciplines but also how to organize my time effectively and efficiently.

So, here I was – studying Physics, even though I skipped some basic physics courses during high school so that I could take more specific classes. The result was lots and lots of struggles and work. But, I have to agree with what many people say about a degree in Physics: What you really learn during a Physics degree is to not give up.
During my time in Physics at the University of Vienna, I found my passions in this area: (1.) Lab work & (2.) nuclear and particle physics. Luckily, I was able to pursue both of them during my bachelor’s and master’s thesis, as I was based at the Stefan-Meyer Institute for Subatomic Physics. In other words – I was soldering, measuring signals with oscilloscopes, and testing detectors (just as you can see in the left picture). 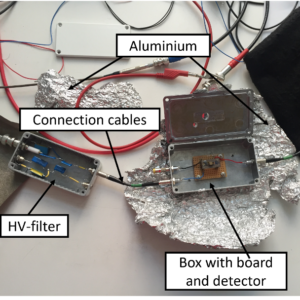 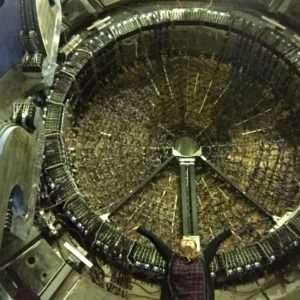 At the LNF (picture by Constanze Leeb).

I did this in the lab there, and also helped out at an experiment at CERN, Switzerland, and at the LNF in Frascati, Italy (see the right picture) – as you can see, I was a bit excited to be there :).

But, now you might be wondering – how did I end up on this website and with EINST4INE?
Well, this is because this is just one part of what I am passionate about. While working in the lab, doing calculations, and trying to understand the physics behind the mechanisms of the physical world – I was always very much aware of the fact that we humans are partially constructing (as we are interpreting, deciding what to look at, etc.) this research, its results, and outcomes. I was missing another important factor in the equation – the human.

The human-centered path & exploring other countries

I undertook bachelor’s studies in Sociology at the University of Vienna at the same time as my physics degree. The two worlds of Physics and Sociology that I encountered clashed a lot, not just administratively, but also in their way of thinking, phrasing, and approaching problems. Quickly, I was questioning the extent to which human aspects are left out in Physics, even though there is so much social interaction involved in the research process. Guess what – there is a whole research area on this, called Science, Technology, and Society. Excited as I was, I started taking courses there and focused on this area, which looks into how science, technology, and society interact with each other and co-evolve. When I decided that I wanted to do a semester abroad, one professor in this field was one of my motivations to pick the University of Chicago, Illinois, U.S. for my exchange. My time in Chicago was amazing – apart from many great cultural experiences and traveling the country, I realized that I really liked to also do qualitative, human-centered research. 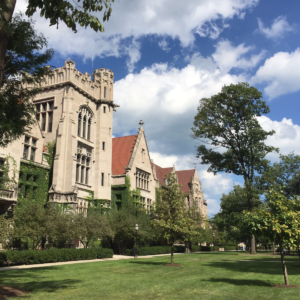 Back at home, I finished my bachelor’s degree with a thesis on identity construction of people from the Bahá’í faith that had to flee from Iran to Austria. The refugee situation during that time in combination with a visit to the Bahá’í temple in Chicago got me interested and I decided to do interviews and write about it. But what now? I knew that I wanted to continue with Physics (if you have managed the bachelor’s – you kind of want the master’s as well), but also that I did not want to stop learning more about the human side. However, I felt like most of the areas in Sociology were very specific and I was keen on learning very broadly again (I know, funny to hear, when I was still studying things on completely different ends of the academic spectrum. But that was the issue – what about the things in between?).

After many more lists and the agony of choice again, I decided that I would study the Middle European interdisciplinary master’s programme in Cognitive Science at the University of Vienna. This degree did exactly what I wanted: it opened many more doors to peak into, such as in the research areas of Linguistics, Artificial Intelligence, Neuroscience, Psychology, Philosophy, and Anthropology. Just like in high school, I was able to pick many different courses and did three projects on completely different topics. First, I was involved in a Social Data Science project with the Complexity Science Hub, Vienna. I did data analysis (topic modeling, descriptive statistics, etc.) on the topic of the spread of misinformation and conspiracy theories in an online comments section of an Austrian newspaper during the first few months of the COVID-19 pandemic. You can check out the website I created for the project and my results – https://cleeb94.github.io/covidinfspreading/!
Deciding that COVID would not stop me, I went on another semester abroad at the University of Ljubljana, Slovenia. Apart from an almost constant lockdown and some anthropology classes that I took, I spend my time on a project on Music Perception with the Faculty of Medicine. Due to the pandemic, I was again, mainly involved in data analysis of a questionnaire looking at the influence of self-chosen vs. pre-selected music pieces on the listener’s well-being. 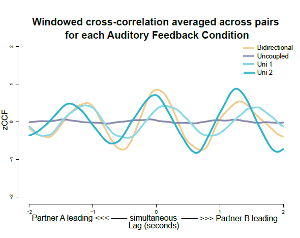 At that time I was already applying to PhD programs and knew that I would not be going in this direction for my next research topic, as I wanted to do something that was (i) new, (ii) broader, and (iii) would let me combine my technical and social background. Counterintuitively, I still decided that I wanted to do my thesis on more music research. I joined another lab of the Central European University in Vienna: the Social Mind and Body lab. Here, I conducted experiments on interpersonal coordination of rhythmic movements under different auditory feedback conditions (see picture).

Who needs a break?

During that time, I discovered EINST4INE and fell in love – I wanted to be part of it as ESR7, working on the integration of “digitally” and “socially”-driven approaches to decision making in contemporary industries. I was already writing my two master’s theses (at the same time, which I would not recommend to anybody) and had a very ambitious time schedule to finish before my next adventure at the University of Cambridge, United Kingdom.

I ended up finishing my physics master end of July, finalizing my cognitive science thesis in August and September, and doing my defense in cognitive science end of September – online and 4 days after I had already moved to Cambridge.
After having studied for so many years, the last months raced by extremely fast, and suddenly here I was – with 4 degrees in 3 different areas, in another country, about to start my PhD position with EINST4INE at the University of Cambridge and not realizing what just happened.
Even though it was a bunch of work, not easy and I did not have a break – I would not want to have it any other way! 🙂 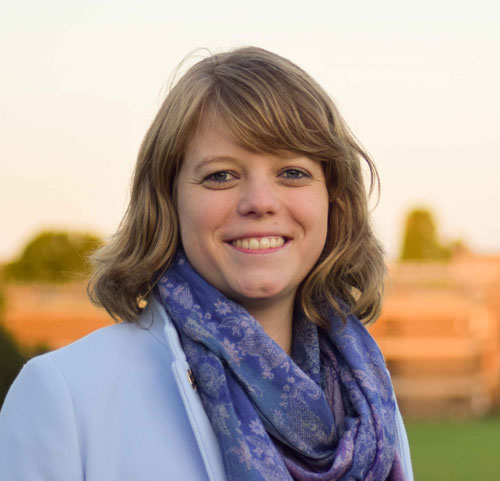